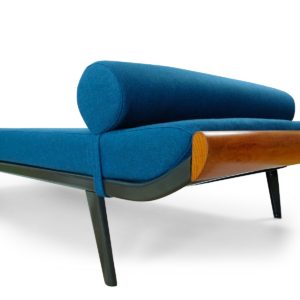 The Dutch Auping is originally a producer of mattresses which started in the late 1900s producing steel hospital beds as a replacement for the then commonly used hay-filled sleeping sacks.

It was only in the post-war period when a relatively unknown designer, Dick Cordemijer designed the Cleopatra daybed which instantly became a Dutch classic. The beds were suited for mass production: over 800,000 bed frames were constructed in the next three decades!

Dick Cordemijer (sometimes referred to as Cordemeyer) has only designed one bed for Auping, however he has worked together with well-known Dutch designer Friso Kramer, Rietveld and the  furniture company Gispen during the 1950s to 1970s.

Still now, 60 years after, the beds prove to be virtually indestructible. Given increased interest in vintage design, Auping has even decided to re-issue a modern version of the Cleopatra Daybed.