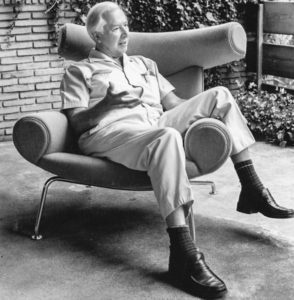 Hans J. Wegner is seen by many as one of the biggest names in furniture design. At the least he spearheaded the rise of popularity of Scandinavian-made furniture and lamps in the post-war period.

Hans Wegner was born in 1914 in southern Denmark, and unlike many of his designer-colleagues of the era, he trained as a craftsman initially, designing his first chair at fifteen years old. Wegner finished his studies at the Danish School of Arts and Craft, after which he joined the well-known Arne Jacobsen and Erik Møller’s firm as a designer. Later he worked with cabinet-maker Johannes Hansen and Michael Laursen before starting his own company in 1943.

Wegner turned out to be almost industrial in terms of the sheer quantity  of designs produced; he designed over 1000 individual pieces, of which about a 100 were actually produced. Famous items are for example, the Wishbone Chair, the Peacock Chair or the Round Chair, used by President John F. Kennedy and Richard Nixon during a television debate.

Wegner’s work is characterized by simple lines, often using natural materials such as paper-cord, leather and rattan. Although mostly known for his chairs, he also designed lamps, tables, cabinets, cupboards etc. Often these items were produced or designed in co-operation with other big names in Scandinavian design such as Fritz Hansen, Andreas Tuck, PP Mobler or Louis Poulsen.

Hans Wegner’s work is featured in the permanent collection of many museums worldwide, and is highly sought after by Scandinavian / mid-century furniture collectors.